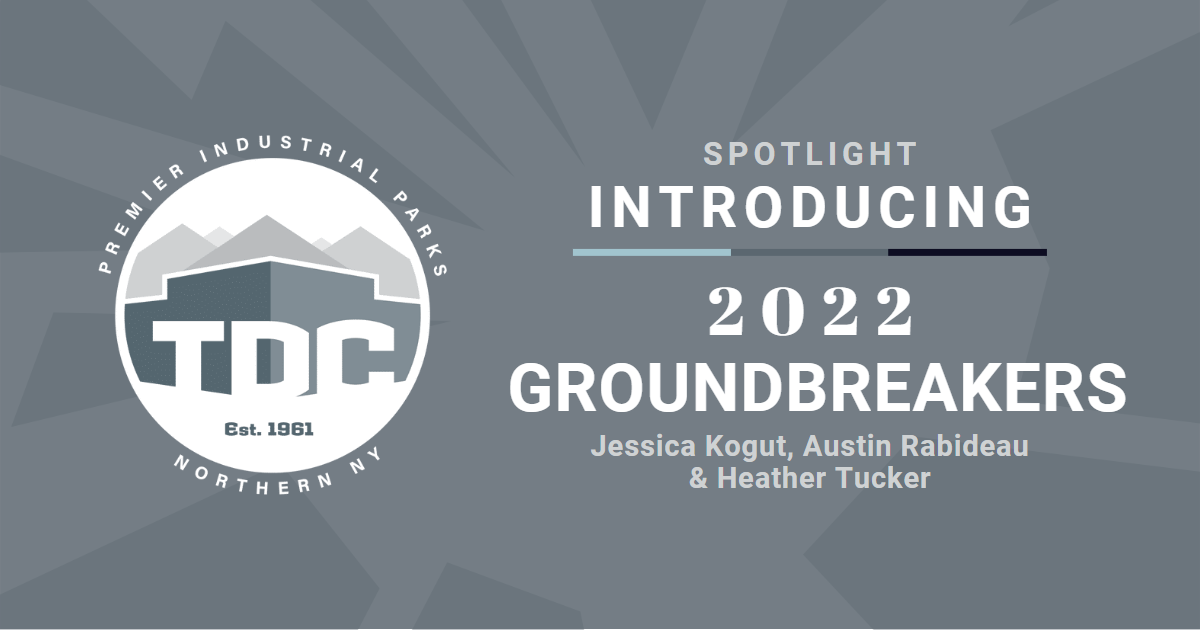 This past June, we asked for local "Groundbreaker" nominations. A groundbreaker is a standout individual in our region who has shown grit, resilience, and leadership. We want to celebrate those in our community who have shown those qualities and inspire others to persevere. Groundbreakers not only contribute to local growth and success by impacting their workplace, but their community and beyond!

The TDC team chose three individuals who exemplified the Groundbreakers series mission as they all made positive contributions to their workplace, community and to themselves! We'd like to introduce you to the following Groundbreakers!

Jessica is a Planner with the Town of Plattsburgh Planning & Community Development Department. Planning & Community Development oversees commercial and industrial site plan review, subdivision review, long term land use planning, and grants management, as well as notable programs such as Hometown Heroes, the Battlefield Memorial Gateway Project, and the Home of the Michigan.

Since joining the Town of Plattsburgh team, Jessica has taken a major role on the Town’s I.D.E.A. (Inclusion, Diversity, Equity, and Anti-Racism/Anti-Bias) Committee which was established in July of 2020. Jessica is also a member of the Girl Scouts Women of Distinction Committee, and a former president of Champlain Valley Business & Professional Women.

Austin is a Production Associate at Schluter Systems in Plattsburgh. His first job was at the age of 16 working at the local Walmart and proceeded to join the ETS Ready2Create program which helped land him a job at the Northeast Group. He has since moved onto Schluter Systems and has been enjoying his new role. Schluter Systems is a manufacturer dedicated to creating innovative solutions for the tile industry whilst working closely within its network of distributors, dealers, tile contractors, architects, specifiers and other members of the building and construction industry.

When Austin is not working or spending time with friends; you can find him enjoying his favorite things like reading the Rolling Stone magazines or writing songs. He is also a hobby musician that loves to sing his heart out!

Heather is Plant Manager at Imeco Cables America in Plattsburgh. She has been with Imeco for nearly nine years, starting as a harness assembler. Imeco Cables produces wire harnesses and power cables for many clients in the transit industry. The cables assembled here in Plattsburgh can control the whole system of a bus from the HVAC to the dashboard to the signal lights. The company also has factories in Aguascalientes (Mexico), Montreal (Canada). Heather started as a harness assembler nearly nine years ago.

Heather completed high school in 2001 then, enrolled in community college. After realizing college wasn't the right pathway for her, she joined the workforce in the manufacturing and warehousing industries. Over the course of 20 years, Heather has worked in various facilities here in Plattsburgh.

The North Country is home for Heather. She was born and raised here and values her large family. Heather is an avid camper, fisherwoman, and explorer of our area. She loves everything the region has to offer; it is packed with the smell of fresh pine, beautiful lakes, rivers, and mountains. There’s not a place she has found in her travels that is comparable!

Learn more about the Groundbreakers series >