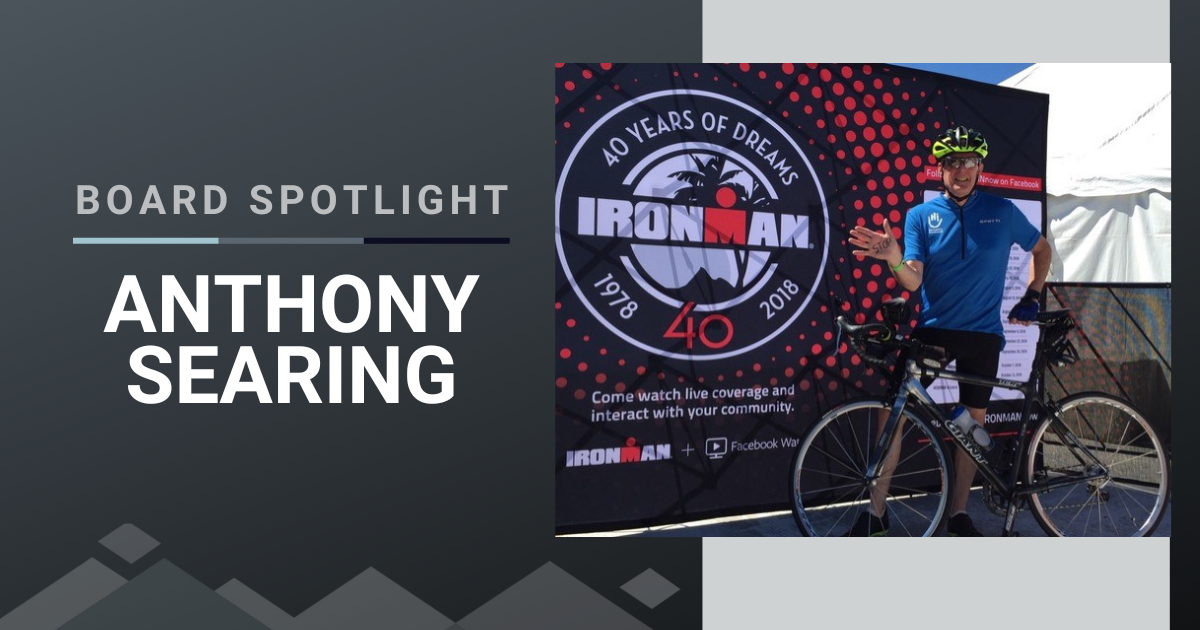 Tony Searing began running marathons 40 years ago. He is not only a marathon/ultra-marathon runner, he is also a triathlete. Tony has competed in 11 consecutive Ironman races in Lake Placid since 2006 and he is already registered for the 2023 race! Now, Tony is preparing for the New York City Marathon on November 6, 2022! He ran his first marathon in Detroit in 1982 and since then he has completed about 12 marathons, including the Burlington marathon, one ultra-marathon and about two dozen half marathons. To prepare for the NYC marathon, Tony has been training every day. However, he is not only dedicated to his training schedule, he actively fundraises and supports the charity, Humanity & Inclusion (HI), formerly Handicap International.

In 2005, Tony decided that he needed a lifestyle change, he wanted to improve his health and wellbeing. Most people would join a gym, sign up for group fitness classes, or join a spin studio. Tony had a bigger challenge in mind, he signed up for the Lake Placid Ironman. The Ironman is an international triathlon race, there are opportunities to compete all over the world. Lake Placid hosts its Ironman race every summer, usually in July and it consists of a 2.4-mile swim, 112-mile bike ride and ending with a 26.2-mile run totaling 140.6 miles and you must complete the race in 17 hours or less! An amazing feat to accomplish.

If you want to train like Tony, you need discipline and dedication. Mondays, Wednesdays and Fridays Tony will swim at Plattsburgh's YMCA. On Tuesdays and Thursdays, he takes intense bootcamp classes and on the weekends, he will run for about two hours. As the marathon quickly approaches, Tony focuses on increasing his mileage. This past weekend he completed his longest training run of 15 miles.

As mentioned, Tony dedicates his athletic efforts to Handicap International - Humanity & Inclusion (HI) and has been doing so since 2015. HI is the co-recipient of the 1997 Nobel Peace Prize and is a 40-year-old independent and impartial organization working in situations of poverty and exclusion, conflict and disaster. HI started as a land mine action charity and provided victim assistance; they are now a very comprehensive humanitarian organization.

Your support keeps me going as I push through the pain and fatigue of training!

There are 50,000 runners participating in this year's New York City Marathon. If you'd like to follow Tony during the race, his race number is 35013 and his start time is 10:20 AM. There is also an app available, TCS New York Marathon, with race day information and it has the ability to track runners.

Tony is very dedicated to his family, church and community. He is a local, North Country resident and a U.S. Navy veteran. He is a professional engineer with vast experience in the manufacturing industry. He is a long-time TDC board member, a former TDC board chair, he sits on the TDC Education and Workforce Development Committee and the Building and Real Estate Committee. Tony has been the Handicap International - Humanity & Inclusion board secretary since 2015, he is VP of the ARC Foundation and is also a member, and past president of Rotary Club Plattsburgh. Tony is a member of the National Ski Patrol and a volunteer EMT.