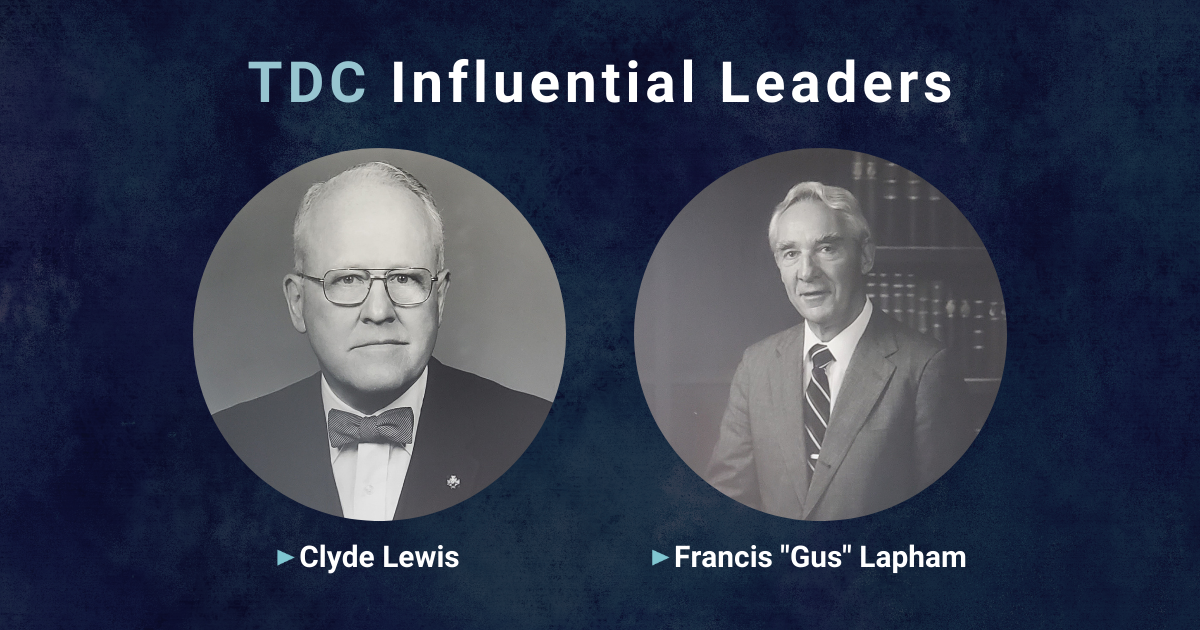 When discussing the history of TDC, you can’t celebrate all our successes without giving thanks to our past staff, board members, and volunteers.

Two names that always rise to the surface when discussing our history are, Clyde Lewis & Gus Lapham. Without the persistence and leadership demonstrated on behalf of TDC, we would be a much different organization today.

We’re diving into the incredible lives that these two led.

As quoted by Clyde Lewis in a memorandum dated August 14, 1993, “Gus Lapham was exceptionally personable, became known statewide and built one of the best development corporations in the state. It was he who developed relations with the Montreal/Canadian sectors, and it was he who planned and followed through on every objective in the best interests of the development corporation.”

Gus was very dedicated to the Clinton County Area Development Corporation (now known as TDC) and was driven by the sentiment to make our community a better place, including a growing concern of local youth leaving the area for employment in “greener pastures”. With this mission in mind, he set to work formulating a plan. He knew what he wanted to achieve, but at this time, planning for a business like this was rather uncharted territory. His first notes are said to have been written on a restaurant napkin. From there he went on to serve our organization for 25 years, creating 4,000 jobs and part of the creation of over 2,000,000 square feet of industrial space. In 1991, TDC’s board of directors dedicated a road in Air Industrial Park in his honor, Gus Lapham Lane.

Gus was born & raised in Plattsburgh, NY. Graduating from St. John's Academy in 1946. He served with the 271st field artillery battalion in Japan from 1946 to 1948. Upon returning from the war, he attended Long Island Agricultural and Technical Institute.

Gus was a Certified Public Accountant, his understanding of business and accounting meant that he was meticulous with all records and lease agreements that TDC engaged in.

After stepping down from TDC, Gus served as president of the New York State Economic Development Council from 1980 to 1981.

Gus was always known to be a hard-working business-man, but those who knew him, knew him to be a family man above all else. His wife and children were always a bigger part of his life. Gus lived to be 83 years old.

Clyde Lewis was not a native to our region. Born in Hoquiam, Washington, where he stayed until he went on to the University of Notre Dame, A.B. Class of 1934 and was Head Manager of Football in 1933. Clyde was also a graduate of Harvard Law School, J.D Class of 1939. During WWII he enlisted in the United State Army Air Corps and was appointed an aviation cadet. Clyde served two tours less two missions with the 401st Bombardment Group (H) 8th Air Force. He served successively as flight commander, operations officer and B-17 squadron commander. Clyde separated as major in September 1945 and ceased flying in 1972 after having logged over 10,500 pilot hours.

Clyde was admitted to practice law in the State of New York in 1940 and the Supreme Court of the United States in 1959. Clyde was a member of Lewis & Rogers P.C. and predecessor law firms since 1940. He also served as the Town Attorney for the Town of Plattsburgh from 1966-1997, retiring December 31, 2002.

Clyde Lewis began his relationship with TDC in the early 1960’s. In 1962 Clyde became involved with the organization as corporate counsel. He and his law firm were heavily involved in working with local bank officers and county representatives to help secure funding for TDC’s early property investments. He provided guidance through much of our land acquisition, building development, and financial decisions. He held his role as corporate counsel until 1998 and was an active member of our board until 1999. Clyde was always very involved in TDC’s operations, but never served as chairperson of the board.

Outside of his work with TDC and his law firm, he was also very active in the community. Especially regarding the Plattsburgh Airforce base. He was a member of the Plattsburgh Air Base Liaison Committee from 1959 to 1995. He was influential in bringing the air force operations to the base prior to its opening and fought for the base to continue to be operational prior to closing. He also was a participant in the Department of Defense Joint Civilian Orientation Conference, 1978; participant National Security Forum, Air War College, 1975.

Clyde lived to be 95 years old.

TDC is grateful to these two individuals for their contributions to our organization and Clinton County at large. Without their dedication and commitment to our community, the business landscape in our region would look much different. It’s easy to think that some of our major employers in the area wouldn’t be located here if it weren’t for the groundwork laid out by the community leaders who set out to create the business that would become TDC.