Plattsburgh Among Top 25 Cities in Americas for FDI Strategy 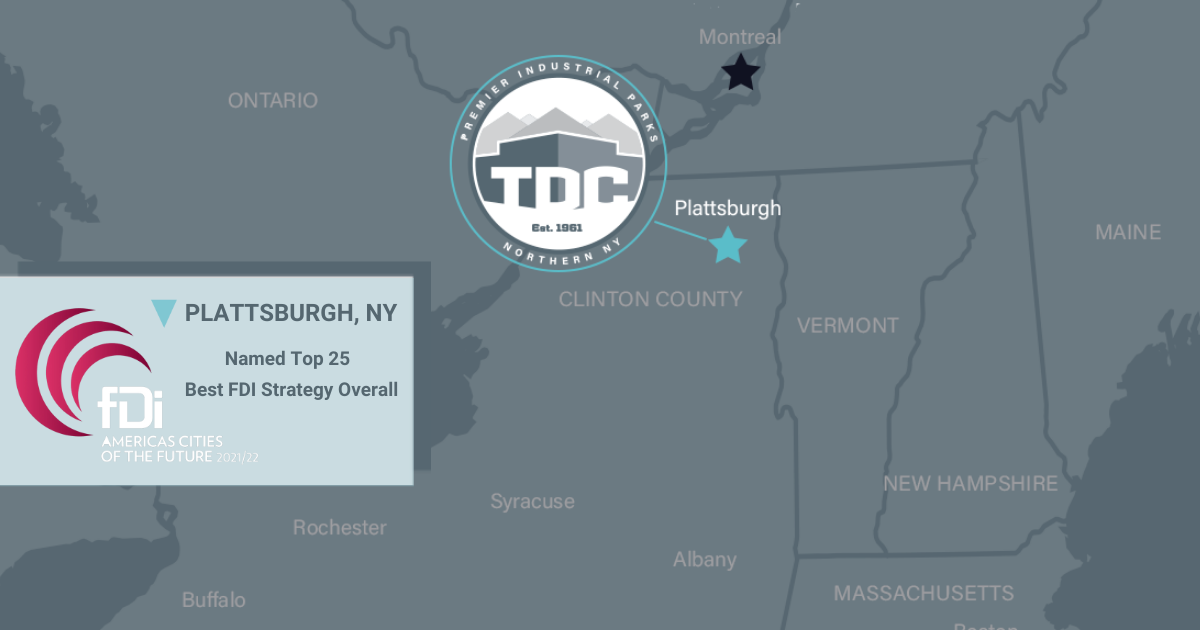 Plattsburgh and the North Country Chamber of Commerce have been recognized by fDi Magazine, a publication of the Financial Times of London, among the Top 25 Cities in the Americas for Foreign Direct Investment (FDI) Strategy. Plattsburgh was #14 among other North and South American cities such as Montreal, New York City, Bogota and San Jose, Costa Rica.

"When they first called us from London, we were gratified to think we had placed so highly among other micropolitan cities," notes Chamber President Garry Douglas. "But then they clarified that the recognition was not split into size categories but was one list of the top 25 strategic performers for cities large and small together. We're not often speechless but we were for a moment this time."

"It's great to see Plattsburgh recognized as a top 25 city in the Americas for FDI Strategy," comments David Champagne, President and CEO of TDC. "I frequently hear Garry Douglas and the North Country Chamber say that we punch above our weight, and this is a perfect example. It is no secret that Plattsburgh has been a go-to destination for Canadian companies looking to access the U.S. market and is quietly becoming recognized as a place to be for international companies. TDC is proud to be part of this effort by providing space and opportunities to create jobs in the region."

The Financial Times invited the North Country Chamber and Plattsburgh to be considered among cities in the Americas earlier this year and the Chamber provided extensive information on continued and expanded FDI strategies in March. The ranking in part recognizes the many efforts of the North Country Chamber to continue and expand its FDI strategies and activities during the height of the global pandemic in 2020, including its extensive pandemic related support services for the area's international manufacturers and supply chains; the launch of the Chamber's new FDI website and brand, NYMTL.com (Where New York Meets Montreal); the simultaneous redesign and relaunch of its workforce recruitment website at northcountrygoodlife.com; expansion of activities for the region's international transportation equipment and aerospace cluster through its cluster organization, NAmTrans;  the continuation by virtual means of its unique FDI workshops and outreach programs in Canada; and its active advocacy related to international supply chains and the U.S.-Canadian border.

"This acknowledgement is a major step in putting Plattsburgh on the global map," says Plattsburgh City Mayor Chris Rosenquest. "As this finding acknowledges, we are a growing community that shares an international stage with other major metropolitan areas in North and South America. As we continue to grow, develop our economy, and attract talent and industry, our city stands at the ready to take on the challenges and opportunities that come with this important standing. This is fantastic for the present and future of our community."

"For 2020, they chose to focus in part on those places which distinguished themselves in terms of stepping up for international business and investment during the pandemic when so much activity froze in the face of uncertainty and travel restrictions," notes Douglas. "With our local partners such as TDC and CITEC, among others, we chose to work with our many existing international companies to sustain operations and, in many cases, to support growth, with examples including Monaghan Medical, Schluter Systems and completion of the new Norsk Titanium facility. And we doubled down on the deployment of new web-based tools and on continuation of cross border partnerships and promotion to show we were very much open for business, ready to host new investment when the world is ready to invest."

Douglas expressed special appreciation for Assemblyman Billy Jones who has continued to help secure funding for the Chamber's U.S.-Canada and international business endeavors and for NAmTrans. He also thanked Clinton County and TDC for continued redevelopment of the former Clinton County Airport site, demonstrating local confidence in the future; the launch of U.S. Customs facilities and operations at Plattsburgh International Airport; and many private investments such as the preparation of the former Pfizer site in Rouses Point for redevelopment by ERS Investors. "It all painted a clear picture of an international business community that not only didn't allow itself to be stalled by the pandemic but in fact continued with infrastructure investments and new strategies for the future. I particularly thank our Chamber team who work constantly on these strategies, especially Susan Matton and Joel Wood."

In addition to being a recognition of the Plattsburgh area's exceptional strategies for attracting foreign direct investment, the Chamber and its economic development partners will be actively using the recognition in all marketing activities going forward. "From experience," reports Douglas, "this type of strong recognition by such a globally respected source provides a real reason to check us out and to hear our story. This has been true in the past and will especially true this time as they are placing us so high amongst such big players."