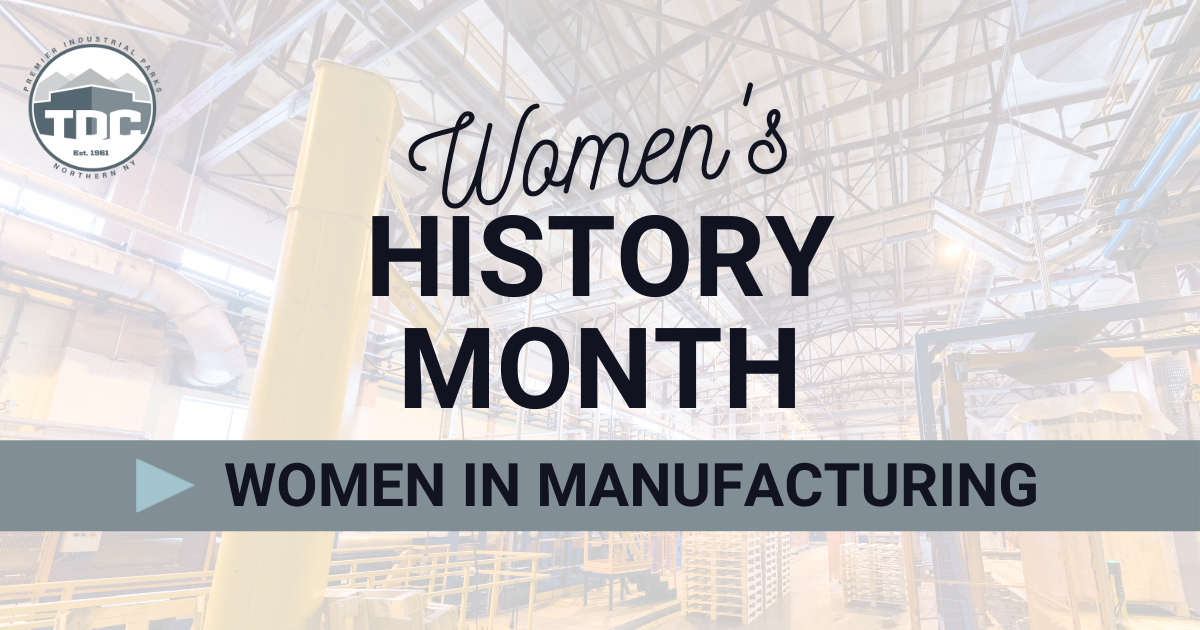 Within TDC’s Parks there are many businesses that literally keep us moving. Air Industrial Park hosts 25 businesses, Banker Road Industrial Park hosts 6 businesses and within these parks, a wide variety of international industrial manufacturers do their business. Within those businesses are thousands of men and women assembling cables, machines, lighting, trains and buses by hand. This month, in honor of Women’s History Month, we will be focusing on the women working in the manufacturing industry here in the Greater Plattsburgh region. During the next few weeks we will be sharing local stories of women within the industry in a variety of positions. We asked them a few questions to learn about their pathways and to share their career path with others. Hopefully, their stories will inspire the young people heading into the workforce.

Women’s History Month was first celebrated in 1981, just 41 years ago. Like we mentioned in our Black History Month story, the dedication began with a week-long celebration called “women’s history week.” Then, in 1987 after the National Women’s History Project petitioned Congress, the month of March was designated “Women’s History Month.” While researching the history of this month, one photo is particularly eye-catching as we see more and more women doing the same labor in a different era under different circumstances. The image (above), found on the Women's History Month website reads, "Milwaukee, Wisconsin. War production workers at the Heil Company making gasoline trailer tanks for the U.S. Army Air Corps. Enola O'Connell, age thirty-two, widow and mother of one child, welding part of a trailer. She is the only woman welder in the plant. This is her first job outside her house."

Women generally entered the workforce during the industrial revolution of the 1920s. Men were sent off to war and women had to take their place in the workforce. We saw the same thing happen during WWII. To the left is a woman featured with a hand drill in Nashville. She was working on a dive bomber. After WWII, women again pushed to enter the workforce; in the 1960s and 1970s the women's equality movement encouraged women to go back to work and by 1999, women in the workforce reached a peak of 60%!

Fast forward to 2017, women made up nearly half of the overall working population, but they still only made up nearly one-third of the manufacturing workforce in the United States, according to the U.S. Census Bureau. Before the pandemic women accounted for more than half of all workers within several industries such as financial, education and health services, leisure and hospitality, and other services. However, there is still much room for growth in many industries such as, agriculture, mining, construction, transportation and more.

The 2020 COVID-19 pandemic caused the women’s labor force participation rate to hit a 33-year low. The lack of support systems, the lack of childcare and the cost of childcare is an ongoing issue. And, these numbers have remained mostly unchanged. While women make up about 47% of the total workforce, they only make up about 30% of the 15.8 million people employed in manufacturing industries, and only 1 in 4 manufacturing leaders are women.

After reading and understanding the history, we are thrilled to showcase the following trailblazers that as mentioned. Follow us on social media to learn more about our local women in manufacturing!